HYDERABAD: Increasing number of layoffs by information technology (IT) firms along with the recent proposal by the US government to end extension of H-1B visa+ for people waiting for green card is giving jitters to techies back home.
The H-1B visa is a non-immigrant visa that allows US- based companies to employ foreign workers, typically for three to six years, in various sectors that require theoretical or technical expertise.

Presently, several H-1B visa holders+ , who have applied for green cards, seek extension until their permanent residency applications are in process. However, as part of the ‘Buy American, Hire American’ initiative, the US government has made numerous proposals to prevent abuse and misuse of H-1B visas.

Techies are on tenterhooks following increasing lay-offs by IT firms in the city. The reduction in staff back home has been a direct fallout of measures being taken to restrict the H-1B visa in the US, including a recent proposal to end extension of such visas for people waiting for green cards. 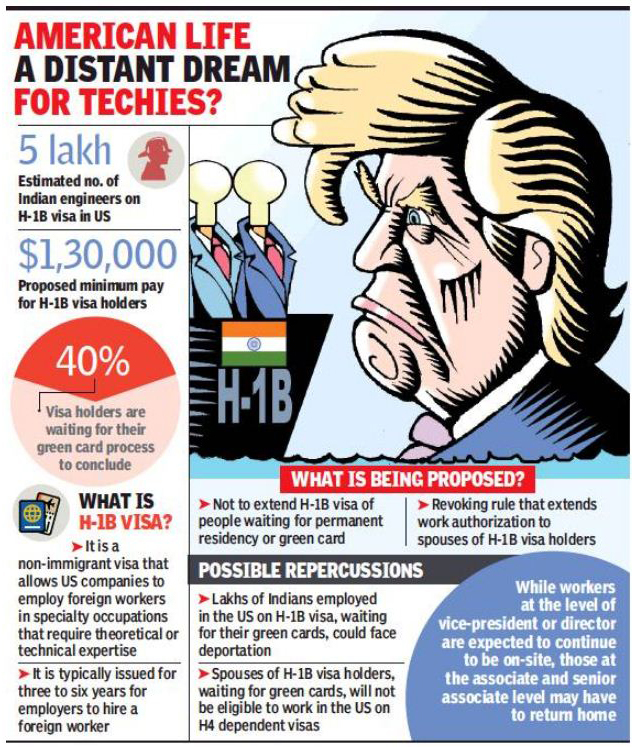 As per the current practice, several H-1B visa holders, who have applied for green cards, seek extension of their visas until their permanent residency applications are in process. However, as part of the ‘Buy American, hire American’ initiative, the Donald Trump-led government has come up with numerous proposals to prevent the abuse of H-1B visas, predominantly used by Indian IT professionals.

With the Department of Homeland Security trying to impose new restrictions to prevent extension of H-1B visas, techies are fearing the worst, preparing for lay-offs back in India.

“Owing to the proposal, several IT companies have already started listing employees who will be kept ‘on-site’ and those who will be asked to return home. Those returning from the US will be direct competitors to existing employees in India. Considering this, even average performers are being asked to voluntarily or involuntarily leave their jobs with a 60-day notice,” said Sundeep Makthala, founder of Telangana Information Technology Association.

According to industry observers, there are about 5 lakh Indians who are working in the US on H-1B visa. Of them, nearly 40 per cent visa holders are waiting for their green card process to conclude. While workers at the level of vice-president or director are expected to continue to be onsite, those at the associate and senior associate level may have to return home.

The US government has also proposed enhancement of minimum wage paid to H1-B visa holders. At present, IT firms in the US hire foreign workforce for $60,000-$80,000 per annum. However, the US government has proposed enhancing the minimum wage of H-1B visa holders to $1.30 lakh. The move is seen as detrimental for the Indian workforce seeking jobs in the US.

“The move is primarily aimed to make it difficult for companies to hire foreign employees. It will certainly impact Indians seeking jobs in the US as not many companies would be able to afford foreign workforce on the minimum salary proposed by the US government,” said Ramesh Logannathan, former president of the Hyderabad Software Enterprises Association.